As time goes on, I find myself more and more appreciative of the amazing beer community out here in Arizona.  This state may have a lot of political, ethical, and violent issues in general, but being able to be a part of a worldly, educated craft beer loving circle is very rewarding.  This past weekend, I was invited to participate in an awesome event hosted by the Beer for Brains Foundation, which is organized by a man many know as Lou, in honor of his wife, Laurie, who was diagnosed with brain cancer and passed in 2009.  Beer for Brains holds many events throughout the year, all centered around brain cancer research while being heavily enmeshed in the beer community.  I wrote about two other events I attended back in March during AZ Beer Week, the AZ Girls’ Pint Out dinner at Firesky Resort and The Epicuriad, both very high-profile pairing dinners that garnered a lot of attention for their efforts.  This most recent event was a little less formal, but not because of the lack of dedication and support, more so because it was a costume party centered around an all-day bocce ball tournament – technically, it actually began Friday night and continued all day Saturday, so a 2-day tournament.

Teams of 4 dressed up in their own individual themes from garden gnomes, complete with large mushroom accoutrements, to some very manly nuns, to a Team Zissou (from The Life Aquatic).  Everyone was in good spirits and there were some delicious beers to be had; Black Raspberry Nectar Mead by Redstone Meadery, Framboise de Amorosa by The Lost Abbey, Raison D’Etre and Indian Brown by Dogfish Head, and Orange Blossom by Papago, to name some that were on tap.  While my team didn’t get very far in the tournament (I wasn’t able to make it Friday night, so I only played one game on Saturday – which we won), I did get to practice my bocce skills, of which there were very few when I first arrived, but I soon found a good rhythm and had a great time.  By the end of the very long day, I ended up terribly sun burnt thanks to the gorgeous weather; but you should see my tan now, I’ve got a pretty nice head start on summer! 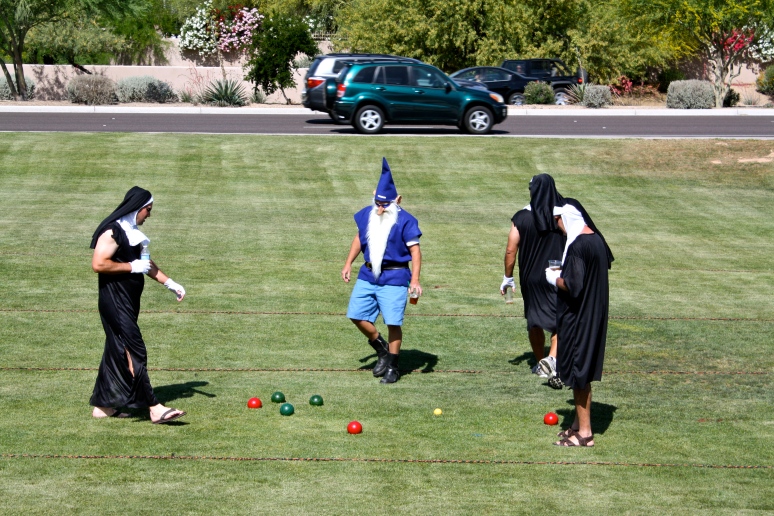 About halfway through the tournament and right after lunch, a second mini-tournament was set up.  Liter steins of beer (~5 pounds) were prepared and teams of 4 (not necessarily the bocce teams) stood behind them, ready to lift when Louis gave the signal.  The team that held the steins straight out in front of them, one at a time, for the longest collective time, would win.  The official name of this Bavarian sport is “Masskrugstemmen.” Apparently the longest time any one person has been able to hold a beer mug like this was 19 minutes.  I don’t have exact numbers, but I believe the longest time that one of the teams managed to hold it (collectively) was about 12 minutes, with the best individual time just under 5 minutes. 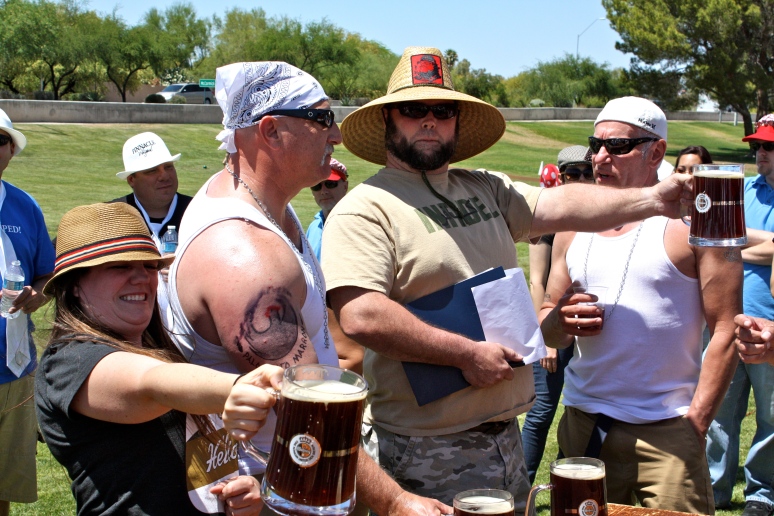 If you’d like to find out more about Beer For Brains and see pictures from other people who attended this event, please visit the Beer For Brains Facebook page and think about donating to this cause.  Proceeds go to benefit the Barrow Brain Tumor Research Center at St. Joseph’s Hospital and Medical Center in Phoenix, Arizona.