Disclaimer:  This post is NOT about Dogfish Head or Brew Masters.  Carry on.

I’m thinking about taking Saturday nights off from reviewing simply because I need a night to actually drink beer, rather than analyze it.  Don’t get me wrong, I love taking a good craft beer and digging into it to find what makes it what it is, but once in a while, I’d like to sit back and pop open a beer I’ve discovered a passion for through reviewing and be able to drink two or three without taking notes or pictures.  I’ve noticed that most people don’t sit online over the weekend anyway, so this shouldn’t be much of a problem.

So on Saturday, seeing as I live in Chandler, I figured I should at least show up to the block party for the grand opening of Chandler City Hall in Downtown Chandler.  We showed up right around 1pm and stayed for a few hours, walking up and down Arizona Avenue to see everything.  There were lots of stands/stalls where people were selling paintings, photography, ceramics, jewelry, jellies and jams; the usual farmer’s market type goods minus fresh produce, an “ice” rink, and a few antique cars right at the end.  I think we even passed a group of carolers dressed to the nines…which was as out of place as the fake ice rink the kids were scrambling around in the 70º weather.  Seriously, hard plastic in place of ice?  Just give them roller skates and helmets, it’s the same thing.  I suppose coming from Wisconsin, where snow and ice inevitably come naturally, I’ve been spoiled my whole life with the whole “white Christmas” season.  I’m going to have to get creative about decorating this year, what with my whole family coming down to help us break in our brand new house about two weeks after we officially move in.  Maybe I’ll put lights on some cactus?

Despite my discomfort with the warm-weather attempt at a Christmasty feeling, I did enjoy touring the new city hall – which I was very impressed with, especially with its great eco-friendly vibe, sharing a caramel apple with my boy, and having lunch at Murphy’s Law.  As shocking as this may sound, Saturday was the first time since I moved to Arizona – just under a year – that I’ve been to this pub.  Every time we visit downtown Chandler, we go to SanTan or El Zocalo, for the beer and sopapillas respectively, so we decided it was about time for us to visit a new place.  I don’t know why I’ve been so out of the loop, but Murphy’s has a great selection of craft beer!  They even do a monthly feature on different styles of beer where they pick a specific style (this month is IPAs) and serve six to ten beers that fall under that category.  Not to mention, the food was pretty darn good, so plenty of reasons to revisit!

Naturally, with me realizing my love for all things bitter and hoppy, that they were featuring IPAs on my first visit was no coincidence, so I ordered a Four Peaks Hop Knot IPA.  My track record with Four Peaks has been pretty hit or miss;  where I enjoyed their Devil’s Pitchfork Pale Ale and 8th Street Ale, I really didn’t care all that much for their Kilt Lifter or their Sunbru.  Coming into this review with a score of 2-2, I was pleasantly surprised to find that their Hop Knot IPA was exquisitely delicious.  Again, I may be partial to IPAs, but I’m sure there’s a way to make a bad IPA out there…I just hope I never have to taste it.

On tap, it arrived at our table glowing a clear golden-copper amber and held a finger-thick off-white head that filled what little space was available above the beer (my only complaint, really, but technically I got more beer).  The head was fueled by multiple steady streams of carbonation that lasted throughout the drink and provided ample support to the amazing sheets of sticky lacing that graced the glass while I sipped on it.  Awesome head retention and lacing?  A great way to start a beer off, in my opinion.

I held my nose over the brew and caught huge whiffs of orange peel and grapefruit zest, pine needle hops, and some faint grassy-malt sweetness underneath.  The lively bitterness almost made it seem fizzy in my nose, but it was a welcome vivacity from an IPA.  I think one of my favorite things about IPAs rather than the obvious bitterness/hops character, is that they remind me of late spring, early summer.  The snow in the mountains has been melted for a few weeks, the grass has finally stopped dying and returned to a glorious thick, green carpet, flowers are finishing bursting open and smells of Jacaranda and Ocotillo blooms fill the warming air.  It makes me want to be outside, soaking up the sun on a hike through South Mountain, or just laying by the pool with a drink.  [Good] IPAs are powerful at melding my imagination and memory together. 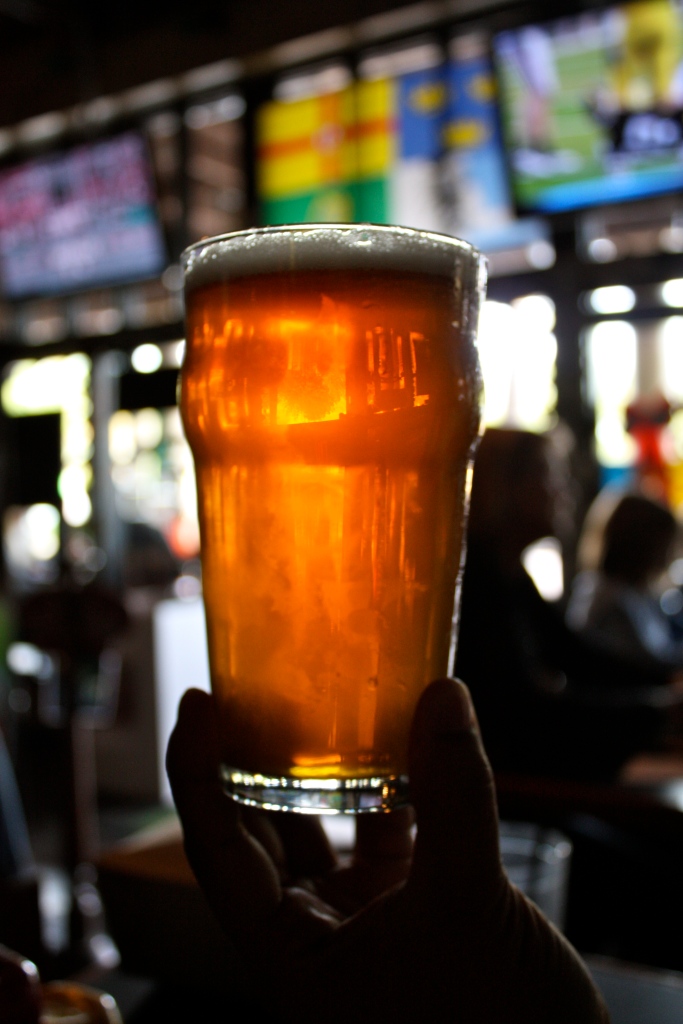 Eager to bathe my taste buds in the hoppy glory that was emanating from the Hop Knot, I first had to get over how super quaffable the brew was.  This is some seriously smooth beer.  It flooded my mouth with just enough piney, resiny hops, orange peel and grapefruit zest without overwhelming my senses.  It was freshly bitter and bright without too much bite thanks to the lightly caramel sweet malts that made a quick appearance before the grand finale.  Throughout the drink, the bitterness briskly jigged with the finely-bubbled peppy carbonation, creating a lighter mouthfeel (among a medium body) and leaving my tongue feeling awake and refreshed.  And despite all of the happy hops jumping around between my cheeks, the ending was nice and smooth with a clean aftertaste.  I can confidently call this the best of the five beers I’ve tried from Four Peaks, and thanks to the good time it showed me, I can consider keeping Four Peaks on my list of favorite Arizona breweries.